Google Shows There Is No End to Major Tech CRE Growth 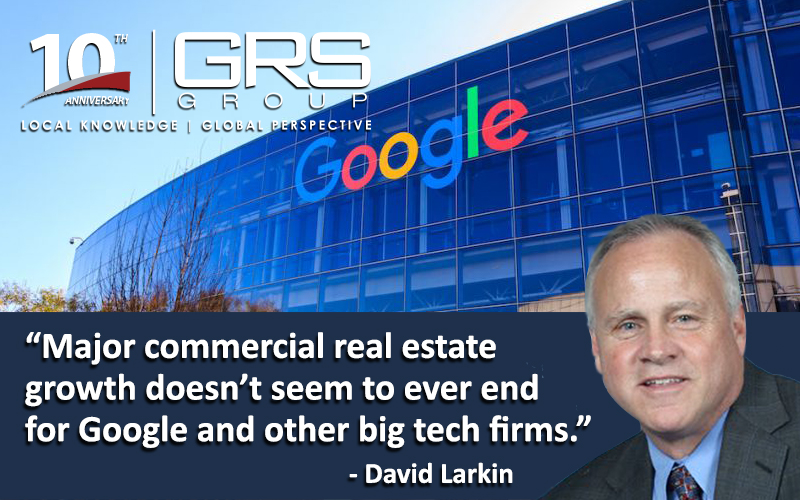 Major commercial real estate growth doesn’t seem to ever end for Google and other big tech firms. Though much of that is obviously seen in the Silicon Valley and San Francisco, where many of these companies are located, the boom isn’t relegated to that region.

Sundar Pichai CEO of Google and its parent company Alphabet recently announced in a blog post that it will spend $10 billion this year on data centers and office buildings across the country in the coming year. The firm will focus on growth in 11 states, including Colorado, Georgia, Massachusetts, Nebraska, New York, Oklahoma, Ohio, Pennsylvania, Texas, Washington and California. Pichai says that Google has a real estate presence currently in 26 states.

As part of this year’s planned work, Pichai mentioned a previously announced $600-million data-center investment in Pryor, Okla.,  reportedly putting its total capital expenditures in the town, which is about 45 miles east of Tulsa, to $3 billion.

Of course, Google is no stranger to major commercial real estate plans.

A recent Progressive Policy Institute (PPI) report revealed that in 2018, Alphabet was the largest real estate investor in the United States, at just under $20.2 billion. And Pichai mentions that last year Alphabet spent $13 billion in locales between South Carolina and Nevada.

Google’s not the only tech company making a significant commercial real estate-investment impact, though.

PPI said that while Alphabet came in first, Amazon.com was third, Microsoft came in fifth, Facebook seventh and Apple was 17th.

Apple is spending $1 billion in Austin, Texas, alone, on a new campus not to mention billions of dollars on data centers in other areas of the country. Besides the billions it is spending on data center development and leasing, Microsoft announced it would pledge $500 million on affordable housing development in the Seattle area, and reportedly just upped that commitment by $250 million.

And then there’s Amazon. Besides its HQ2 plans outside of Washington, D.C., it is also making major real estate investments in Nashville, which has helped that city become a major commercial real estate growth hub.

Despite these developments taking place by Google and other tech firms across the country, the Silicon Valley is still seeing its share of major commercial real estate growth as a result of the industry’s expansion. Since 2010, according to Colliers International, there has been 40 million square feet of CRE inventory added to the area, much of that fueled by tech. Just four companies, Google, Apple, Facebook, and Amazon, reportedly take up 47.8 million square feet in the Valley.

And as it does in the rest of the country, Google has big plans for San Jose. There it has the massive Downtown West mixed-use project planned, which would add 6.5 million square feet of office, 500,000 square feet of retail, several thousand housing units.

It seems like we’ll be seeing more of this major commercial real estate expansion by tech companies for many years to come.