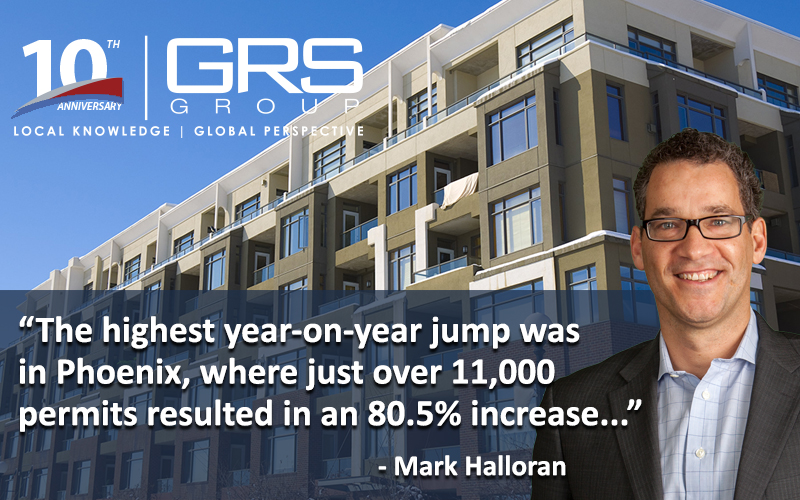 We have seen pent-up multifamily demand in several areas around the country, and it looks as though multifamily developers are stepping up to the plate to solve the challenge.

January was a record month for new apartment construction, according to a recent RealPage report. The firm says the 547,000 units that started in January were at a 34-year high and up an impressive 77.6 percent from the same year-ago period.

Regionally, the Northeast saw the biggest increase in permits, shooting up 51.3 percent year over year. The Midwest followed, at 29.7 percent.

The New York City region had the most apartment-permit approvals in January, at 39,658, according to RealPage, and that was a 23.9-percent year-over-year increase. The highest year-on-year jump was in the Phoenix metro, where the just over 11,000 permits resulted in an 80.5-percent increase.

It’s doubtful that these big rises in permits will equal a lot of vacancy in the near-term, at least according to a CBRE report that looks at what 2020 will bring for multifamily.

The commercial real estate services firm says that 2020 vacancy rates could rise by 20 basis points, hitting 4.5 percent, which is below the 5,1-percent-long-term average. Multifamily completions this year, expected by CBRE to total 280,000, just down from 281,000 in 2019.

CBRE also says there is a shift to suburban development from urban building, which has been on the upswing over the last several years:

“Development will continue in both urban and suburban locations next year,” CBRE says. “The geographic emphasis, however, is shifting to the suburbs—both mid-rise ‘urbanesque’ product in the densifying suburbs and garden product in more traditional greenfield locations.”

The suburbs of the Atlanta; Austin, Texas; Boston; and Phoenix should see the most development, CBRE says, and none of them are in states of any overbuilding that should concern investors, especially with job and population growth.

For investors interested in higher returns in smaller markets, where there is construction, and rent growth exceeded four percent over the last year, CBRE says to keep an eye out on Albuquerque; Birmingham, Ala.; Colorado Springs; Dayton, Ohio; Greensboro, N.C.; Memphis; and Tucson.

It seems like multifamily development is a strong bet in most markets right now and strong enough to consider the value-add in lesser-traveled metros.