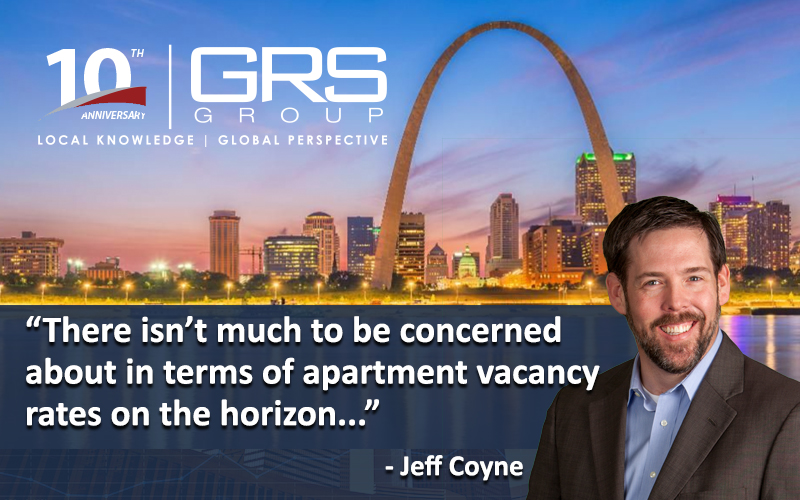 There has been little to worry about for investors in the multifamily commercial real estate sector for almost a decade now, and a new report from RealPage confirms the same.  As of the start of 2020, there isn’t much to be concerned about in terms of apartment vacancy rates on the horizon either.

As of the end of last year, during the fourth quarter, RealPage’s research team has national occupancy rates at a tight 95.8 percent, a 40-basis-point, jump from the same time in 2018.

Some of the biggest occupancy increases year over year haven’t always equated to the highest occupancy rates. But this might surprise some of commercial real estate’s multifamily-investment watchers.

On RealPage’s list, the most significant city, with a 140-basis-point jump, is St. Louis, topping out at a 95.6-percent vacancy rate, just below the nation’s average.

This might be a bit of a blip on the radar screen, considering that national averages are so high, but there is some interesting activity happening on the eastern side of Missouri. Rental rates were at an $859 average to end the year, up a reported 3.7 percent from the prior month, according to Multi-Housing News.

Also in the fourth quarter, a new player entered the St. Louis market. San Francisco-based Hamilton Zanze made a $44-million acquisition of a complex in the city’s Tribeca neighborhood.

Nationally, the highest occupancy rate in the study was owned by New York City, which is probably not much of a shock, at 97.6 percent, an 80-basis-point rise. Meanwhile, there were some locales listed that had some large basis-point decreases in occupancy, though none of them seemed overly problematic from an overall vacancy standpoint.

Of all places, arguably the most-challenging market to find space in the country, San Francisco, ironically, witnessed a 20-basis-point dip, though it ended the year with a 95.8-percent occupancy rate. There are plenty of projects underway in the city, and it seems like that could be making a difference in helping the city’s housing issues – although that is a hot topic of debate there?

Regardless, commercial real estate’s multifamily sector seems to be riding a strong wave, as it has for several years now.