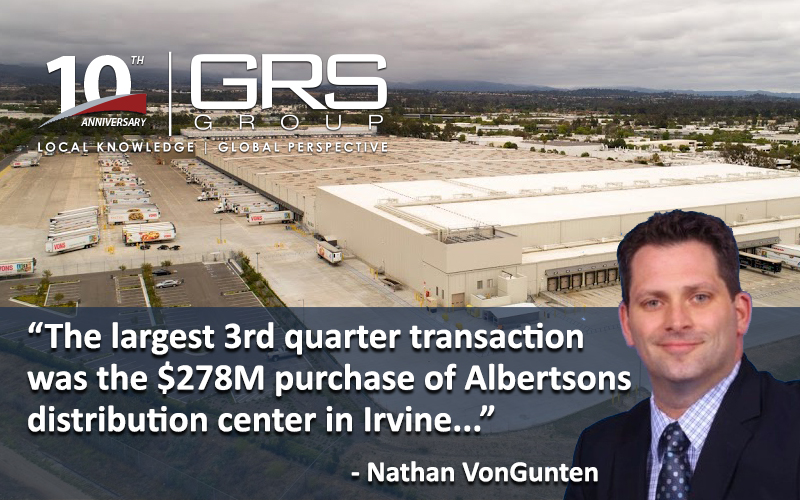 Nathan VonGunten is a senior vice president at GRS Group. He can be reached at 330.242.1991 or via email at nvongunten@fv2.d32.myftpupload.com

WeWork’s failed attempt at going public gained a lot of attention, but it could be argued that even though WeWork own real estate, it is primarily a tenant.

A more traditional offering is one by Rochester, N.Y.-based REIT Broadstone Net Lease could take place in early 2020 with the intention of raising $600 million. The company owns 662 net lease properties in 42 states, with healthcare, industrial, retail and office tenants.

The IPO comes at a time when commercial real estate’s net lease sector in 2019 is set to exceed last year’s all-time high transaction volume of nearly $70 billon, according to a CBRE report. Third-quarter transactions in the space hit $20.9 billion, a 30.2 percent increase from the same year-ago period. Year-to-date investment through the third quarter hit $55.2 billion, up 24 percent from the same period in 2018. San Jose, Calif.; and the Dallas and Los Angeles areas all totaled more than $1 billion in transactions.

The largest transaction during the third quarter was the $278-million purchase of an Albertsons distribution center in Irvine, Calif., by CenterPoint Properties, a deal that was reportedly record breaking for a warehouse property.

Broadstone has played its part in the buyers’ market, too as of late. The REIT made six acquisitions that totaled $793.2 million during its third quarter. The purchases gave it an overall gain of 32 assets. One of the deals included a portfolio of 23 industrial and office/flex properties for $735.7 million. Year to date, at the end of the third quarter, the REIT had bought close to $1 billion in properties.

Of Broadstone’s more than 660 assets, totaling 27.5 million square feet, all are leased except four. Its portfolio has 187 different tenants, and no single company makes up more than 2.8 percent of the assets’ leasable space. Rents in its portfolio increased two percent year over year during the quarter.

In November Broadstone Real Estate, the parent company of Broadstone Net Lease, decided to internalize the latter’s management, in order to prepare for BNL to go public.

BNL is not the only commercial real estate firm preparing to go public. Bloomberg recently reported that a retail owner named NetSTREIT Corp. is also raising capital to go public.