Northern Virginia Is for CRE Lovers 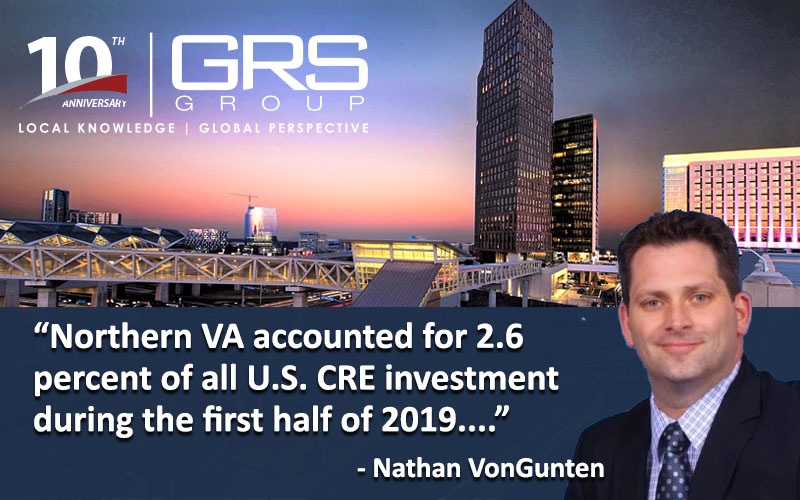 Nathan VonGunten is a senior vice president at GRS Group. He can be reached at 330.242.1991 or via email at nvongunten@fv2.d32.myftpupload.com

There is much to be gleaned from the annual PwC and Urban Land Institute’s Emerging Trends in Real Estate Report, which covers several of the most significant current trends in commercial real estate, as well as what to expect in the short-term.

Overall sentiment by those survey is, as expected, positive, with the usual points of caution, such as “what ifs?” in the economy, a lack of workforce housing, hard-to-keep-up-with tech trends and global warming.

Its list of the top 10 markets with the best commercial real estate prospects over the next year, with Austin, Texas; Raleigh-Durham, N.C.; and Nashville taking the top three spots. All three were in the top 10 in last year’s report.

But one region seen as improving measurably over the last year was Northern Virginia, ranked 14th in the current report, jumping from 24th place last year.

PwC/ULI says that Northern Virginia accounted for 2.6 percent of all U.S. commercial real estate investment during the first half of 2019.

NoVa was far from being a weak market before, but right now it has some pretty major developments happening: Amazon’s HQ2 in Crystal City is attracting ancillary projects, it is home to what is arguably one of the hottest industrial markets in the country, and though it’s delayed by a few months, the Metro’s Silver Line should be completed next year, connecting rail transit to Dulles International Airport.

The multifamily market is seeing some major growth right now, according to a Newmark Knight Frank report on the area’s second-quarter performance. Rents have increased 3.4 percent year over year, while the occupancy rate stood at 96.5 percent. During the three months there were just under 2,800 units leased, and several projects are in the works that would add thousands of apartment units to Northern Virginia.

So with Amazon just still in the planning stages of moving into its headquarters, the Silver Line not even complete and industrial vacancy at a reported all-time low of 6.1 percent with more heavy demand and more building on the way, Northern Virginia’s commercial real estate future is sure to be active and worth watching.