Is CRE Prepared for More Earthquakes? 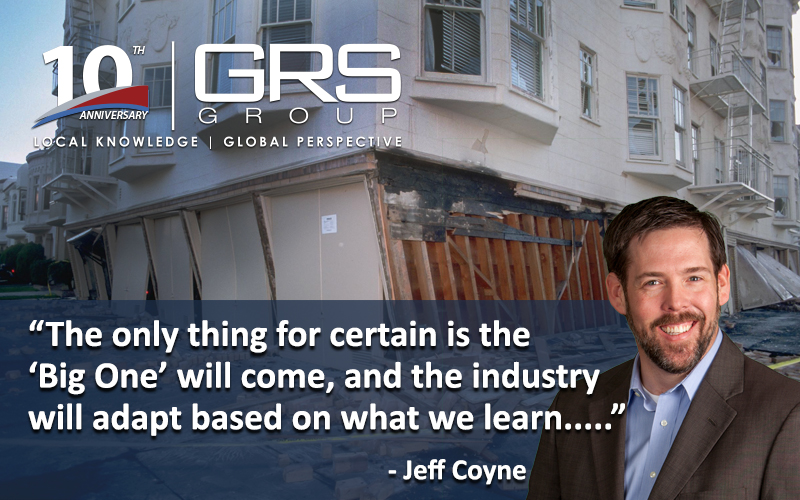 When the recent magnitude 7.1 earthquake ruptured the Mojave Desert floor, it packed the energy of 45 atomic bombs of the type that fell on Hiroshima.

These pics from a Google search show just how strong of an event the area experienced.

While the outcome of the quake on commercial real estate has yet to be fully determined, it’s safe to state that it could have been much worse. Although the quake was the most powerful in Southern California in 20 years, a variety of reasons play into this non-apocalyptic outcome – the fault location and tilt; direction of the seismic waves; the type of quake; and some good luck.

Location – The Ridgecrest area is located in the Eastern California Shear Zone which has, historically, produced some of the state’s biggest quakes on record. The remoteness of the area meant the most violent shaking was far away from populated areas and thus meant sparse commercial real estate development. The strongest waves headed toward the Sequoia National Forest to the northwest, or largely uninhabited areas of the Mojave Desert. In my research, the most populated area that received damage was Naval Air Weapons Station China Lake, which reported some damage to its elementary school.

Direction – The massive earthquake ruptured on a fault whose northwest-southeast direction pushed the worst shaking to areas that weren’t developed/populated, per the above. In fact, northern Los Angeles County would have experienced far more shaking had the quake occurred on a fault with a different direction.

Per the LA Times:

“For example, a rupture on the nearby Garlock fault, one of California’s faster-moving faults that runs on a northeast-southwest alignment, would be capable of directing heavier shaking to areas like Bakersfield and Ventura County.

If this earthquake had been on the Garlock fault, then, yeah, Bakersfield, the cities in the Mojave Desert, would have been impacted more strongly, and L.A. would have felt stronger shaking,” Caltech seismologist Egill Hauksson said. “You generate energy, it piles up and it heads tow ard the west and south.”

Type – An earthquake’s “strength” depends on many factors.  These include magnitude, depth under the Earth’s surface, distance from the epicenter and intensity. The area of the fault where the sudden rupture takes place is called the focus or hypocenter of the earthquake. The point on the Earth’s surface directly above the focus is called the epicenter of the earthquake.

As USGS says: “The severity of an earthquake can be expressed in terms of the intensity and magnitude. … Intensity is based on the observed effects of ground shaking on people, buildings, and natural features. … The magnitude of an earthquake is thus represented by a single, instrumentally determined value.” Specifically, the Richter Scale, “magnitude is expressed in whole numbers and decimal fractions. For example, a magnitude of 5.3 might be computed for a moderate earthquake, and a strong earthquake might be rated as magnitude 6.3. Because of the logarithmic basis of the scale, each whole number increase in magnitude represents a tenfold increase in measured amplitude. As an estimate of energy, each whole number step in the magnitude scale corresponds to the release of about 31 times more energy than the amount associated with the preceding whole number value.”

In other words, you feel worse shaking if you’re in the direction of the path of the earthquake, much like hearing the high pitch of a train whistle engine racing toward you, and it dissipates as it heads away. As an earthquake is coming at you, ground shaking will be stronger. Especially if the waves are hitting closely together like they were in the recent quake.  In a stroke of good luck, the powerful waves from this quake – classified as capable of causing buildings to collapse – glanced the towns of Ridgecrest and Trona, which minimized CRE damage.

The best guidance depends on who is asking.

For buyers, a Level 1 (or higher) Seismic Assessment should be considered on any deal in an earthquake prone zone. It will give you the best information on how a building of your make and type would handle an earthquake on average (Scenario Expected Loss, 50% level of confidence), or how it would handle it with a more conservative approach (SEL, 90% confidence level). Looking into, and possibly taking out, an earthquake insurance policy makes sense if the terms are reasonable and cover the buyer. Lastly, any site with seismic issues can be retrofitted at a fraction of the purchase price and will provide a higher level of confidence that the property will fare better than if non-retrofitted.

For lenders, identifying the exposure to their portfolios due to earthquakes should be considered, and stress tested. GRS can help with considerations that loan committees could consider and help to shape a scope of work that is in line with the industry, or more to the conservative side if that’s needed.

We will often provide rush assessments of properties in areas which have been hardest hit. I performed multiple assessments on sites in the Napa/Sonoma area following the quake of 2014. These post-quake assessments can provide owners and lenders with the experience of a structural engineer’s opinion on potential impacts to a site – which is far better than the laypersons assessment.  Not all “cracks” are created equal…

Other requests include training on earthquakes and considering changes to their lending criteria to determine the need for a higher level of confidence (Level 0 to Level 1 Seismic Risk Analysis) or a change to their scope and which deals could require insurance.

What are some things that owners can do to help prepare them for similar events?

The first thing I would recommend is research and added learning how these different factors combine to result in the seismic numbers they see in our reports.  Knowledge of what is factored into seismic reports can be treated as a check box for many. Borrowers who understand how the sites are assessed are able to identify problematic areas of their sites or entire properties within their portfolio for additional analysis. Many of my clients know that Agency lenders will require additional requirements if there is a high SEL, or a building stability issue that will require additional work in the loan approval process. Knowing how to spot these potential concerns at the outset of a transaction can save time, money and offers value to their clients.

Lastly, as outlined above, owners can retrofit their sites after determining their potential earthquake exposure via a Level 0 or Level 1 SRA. While building code determines the need to build to ensure the people inside a structure have the best chance to survive a quake, it does not factor in the ability of the building to survive the quake – just to allow safe zones for the occupants to survive.  So, there is a common misconception that new buildings are free from seismic concerns due to building codes. While it does mean a better chance for a good outcome, it’s not a sure thing.  A seismic evaluation can help.

Is CRE is in good shape overall to deal with major earthquakes?

As a whole the CRE industry is well prepared and positioned for the outcomes from “The Big One” when it finally occurs. The location of the quake, time of day, and many other factors will dictate the losses that are bound to come, but for now, the industry certainly takes the possibility seriously and has best practices which have set the approach to lending on sites in earthquake prone sites.

While no one can know the outcome from this possible scenario, the only thing that is certain is the quake will come, and the industry will change and adapt based on what we learn.

Understanding the condition of a structure as well as the major building systems and components can be critical to the evaluation of the economic viability of a transaction. GRS Group’s professional staff of licensed engineers, registered architects, construction experts and cost analysts are experienced in responding quickly and effectively to the detailed requirements and fast turnaround times demanded by our clients.