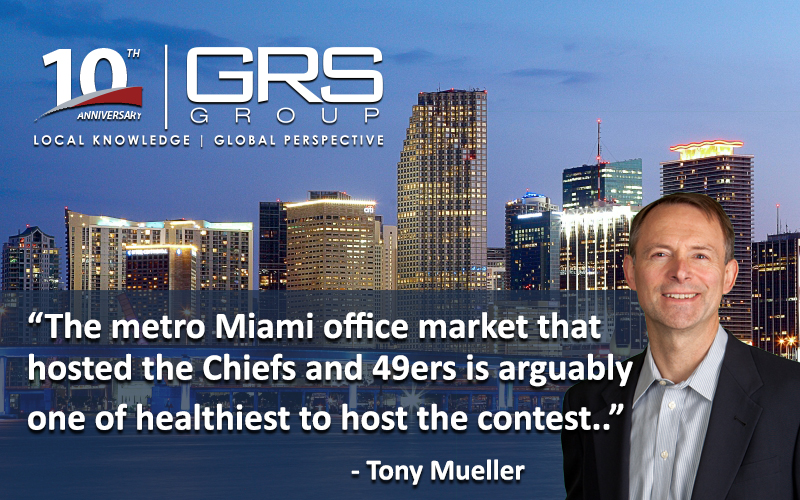 Miami was host to Super Bowl LIV on Feb. 2, making it the 11th time the city has hosted the NFL’s biggest game. And the 2020 version of the metro Miami office market that the Kansas City Chiefs and San Francisco 49ers played in is arguably one of healthiest to host the contest.

The area’s office climate is fueled by an unbelievably low 2.7 percent unemployment at the end of 2019, after 24,700 jobs were added over 12 months.

This helped the market post a decrease in its vacancy rate while new supply was added during the fourth quarter, according to a Cushman & Wakefield report (download here). The rate at the end of the year was 12.4 percent, while 245,000 square feet was delivered, 40 percent of that preleased. A total of 2.6 million square feet was leased in 2019, surpassing the prior year.

One of the most significant developments is 830 Brickell, being built by Oko Group and Cain International. At 57 stories and 724 square feet tall, it will reportedly be the second-tallest office tower in Miami. With just over one million square feet, 830 Brickell will feature a rooftop restaurant, a fitness facility, conference space and a 14th floor outdoor terrace.

Another major development underway is The Plaza at Coral Gables, being built by Agave Ponce. The first phase of the multi-use project will have about 300,000 square feet of offices as well as retail and multifamily components.

Meanwhile, the Super Bowl was a boom for Miami’s hotel market. It came at a time, luckily for area hotel operators, when supply seemed to be outstripping demand. Nine new hotels were added to the area during the first ten months of 2019, bringing 894 additional rooms.

The growth comes at a time when hotel fundamentals have seen a slide. As of October, average daily room rates were down 3.6 percent year over year, while RevPAR (revenue per available room) dropped 3.3 percent. More than 20 hotels are currently under construction in the area.

As with new office construction, we will see if hotel demand can pace keep pace with the new product.