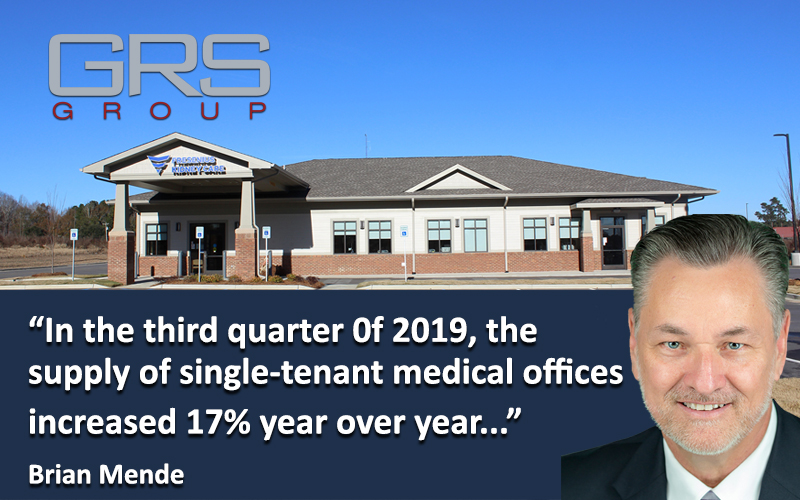 Investors interested in single-tenant real estate that want to have as much e-commerce immunity as possible could do worse than exploring the medical sector of net lease arena.

As a result of these developments and others, there is strong demand for these assets, and capitalization rates already low, dropped slightly during the third quarter, according to The Boulder Group.

Medical-use cap rates came in at 6.45 percent during the period, a drop from 6.47 percent during 2018’s third quarter. Net lease cap rates across all tenant uses were dropped to 6.35 percent from 6.38 percent. The reason for the difference, says Boulder, is that the medical sector does not have as many investment-grade tenants as others, such as drug stores.

Private investors are interested in putting money toward credit-backed tenants.

One of those is Fresenius Medical Care, which operates about 2,585 dialysis centers in North America at the end of its third quarter, a four-percent increase from the same year-ago period.

Dialysis facilities enjoyed the lowest cap rates, at 6.15 percent, though that was an increase from six percent during last year’s third quarter, possibly due to more supply coming on the market. In the third quarter, the supply of single-tenant medical offices increased 17 percent year over year, Boulder says.

The other tenants favored by private investors are associated with hospital-backed medical groups. Urgent care facilities, which often fall under this category, saw Q3 cap rates fall to 7.25 percent from 7.3 percent. However, of all tenants in the sector, only about 27 percent are investment grade.

That’s where institutional investors come in. They are more liable to acquire assets leased by physician groups, which trade for higher cap rates. General doctor-leased asset cap rates fell during the third quarter year over year, though, to 6.75 percent from 6.81 percent.

With investors looking for real estate that is Internet immune, and an aging population, the appetite for medical net lease shouldn’t die down any time soon.