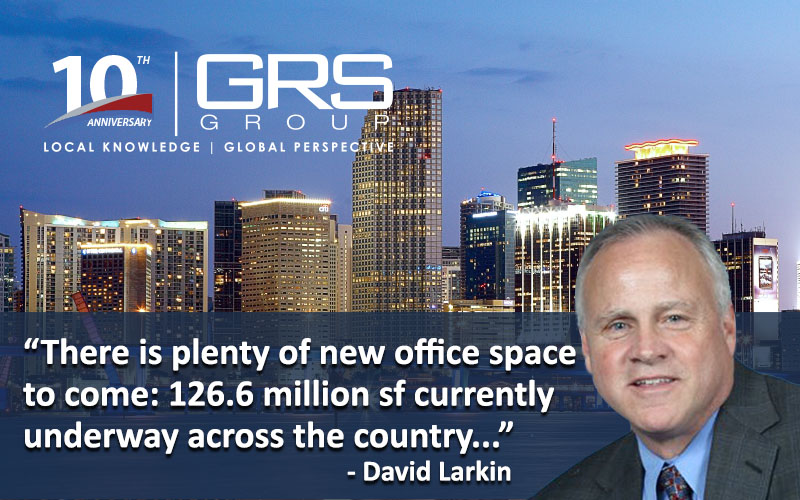 Continued growth in the U.S. economy, including a 3.5 percent unemployment rate that is the lowest since 1969, continued to drive commercial real estate’s office sector during the third quarter of 2019.

Mirroring the economy, national office vacancy rates were the lowest since 2007, right before the Great Recession, coming in at 12.9 percent, according to a Cushman & Wakefield report (download here). And asking rents on average are the highest ever recorded.

Of the 87 markets studied by the firm, 50 saw vacancy rates decline. San Francisco, it should come as no surprise, came in with the lowest rate, at 5.3 percent. In that city, major leases during the quarter included gaming company Znga released 185,000 square feet and ad agency WPP leased 115,000 square feet.

Other metros with extremely low vacancy rates were the Seattle area, at 7.2 percent; California’s Inland Empire, at 7.5 percent; and Raleigh-Durham, N.C., at 7.9 percent.

And there is plenty more new office space to come, with 126.6 million square feet currently underway across the country.

Manhattan has the most current construction, at 13.7 million square feet. One of those is Brookfield’s multi-use Manhattan West project, which is going up near another massive development in the works, Hudson Yards, opening in phases.

Rents are rising as the new product comes out of the ground. The third quarter saw the highest-ever rent per square foot in the United States, at $32.62, a 0.7 percent increase from the second quarter and up 4.1 percent from the same year-ago period.

Since early 2011, the national average rent has risen 32.5 percent. San Francisco experienced the biggest increase in the country since then, a staggering 113.7 percent. Other parts of the Bay area rounded out the top three, with San Mateo County up 88.2 percent and Oakland and the East Bay rising 78.3 percent.

If we are truly in the midst of an economic slowdown, it didn’t register commercial real estate’s office arena.