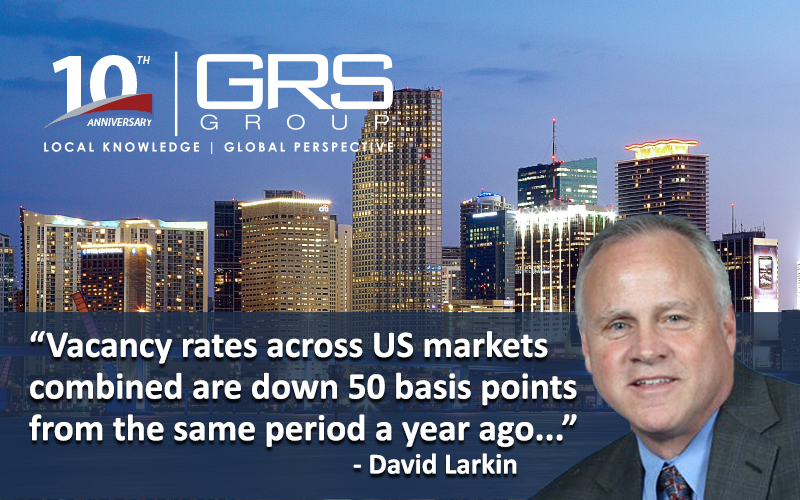 If the winds of caution are blowing about a potential recession in the near future, commercial real estate’s national office industry doesn’t seem swayed.

Office continued its growth mode during the second quarter, and most markets are in good share, according to a recent Newmark Knight Frank report. Vacancy rates across the United States’ markets combined came in at 12.9 percent, down 50 basis points from the same year-ago period, despite 11.9 million square feet being added during the period.

Meanwhile, tenant demand pushed up rents 3.2 percent from last year’s second quarter, hitting $28.98 per square foot. Rent growth is still strong, though not as high as the peak increase during the current economic cycle of 3.8 percent in 2015’s fourth quarter.

Raleigh-Durham had the highest rent growth, rising 8.4 percent, to $26.37. The market is now known for building creative office space in former tobacco mills and big box stores, according to a JLL report. The second-highest rent increase was in the Boston area, up 8.3 percent, due to growing demand by the tech and life sciences industries. Rent decreases were experienced in Fairfield, Conn., and southern New Jersey.

When it comes to vacancy rates, the leader is Manhattan, at 6.8 percent, which is impressively finding ways to fill up its country-leading supply. Among the major leases in the borough include: Time Warner signing an expected lease for its 1.5-million-square-foot headquarters at the Hudson Yards development, as well as a 493,114-square-foot renewal by EmblemHealth at 55 Water Street, in the Financial District.

Seattle posted the largest decline in vacancy, with 1.8 million square feet absorption during the quarter, dropping its rate to 7.1 percent, a 230-basis-point decrease. Hulu is among the large tech tenants taking up more space in that metro area.

The largest vacancy rates were recorded in Oklahoma City, totaling 24.7 percent, followed by Houston, at 21.2 percent.

As of the second quarter there was 97.2 million square feet of office under construction around the country. Newmark said that most cities have new construction under control, with it at or below two percent of the area’s total inventory. However, it warned that certain locales are in the danger zone, hovering at or above five percent. They include Salt Lake City, Seattle and the Silicon Valley. However, all three markets are considered strong and currently have vacancy rates under 10 percent, so demand could likely makeup for their vigorous pipelines.