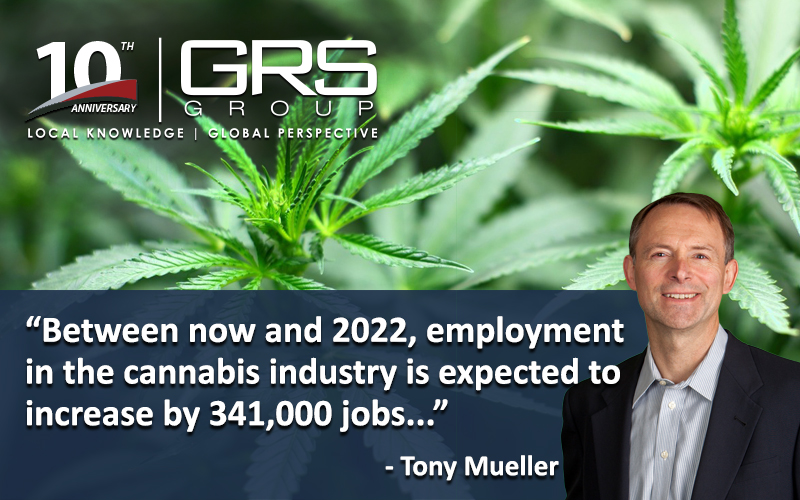 There’s not much reason to think that growth in commercial real estate associated with the marijuana industry will abate any time soon, according to a recent Integra Realty Resources (IRR) report.

Recreational marijuana is legal in 10 states, while medical usage is allowed in 33, and that number is expected to keep increasing. Meanwhile, states that have recently legalized recreational, such as California and Nevada, are still in the early stages of operational businesses, so the growth curve is only beginning. And to the north, Canada has become the first western country to allow full federal legalization.

IRR says that between now and 2022, employment in the cannabis industry is expected to increase by 341,000 jobs, a 21-percent annual jump that would make it the fastest-growing business in the country. Job growth is taking place across disciplines in the field, including horticulturalists, extraction technicians, accounting, consulting, retail sales and management, lab techs, security, cultivation facility operators and distribution specialists.

In Nevada, it was forecast that annual revenues would hit $1 billion by 2022, but in its first 12 months of recreational sales, starting in July of 2017, it reportedly brought in $425 million. California is facing growth pains for several regulatory reasons, in specific municipalities, but recreational sales there still ended at $350 million in last year’s third quarter, a 24-percent increase from the prior three months.

The only downside for those involved in the business is the deflation of prices, as competition has increased. In Washington State, for example, prices per retail gram were between $20 and $25 in July 2014 and have since dropped to between $5 and $8, IRR says.

That’s not enough, though, to cut back the number of employees needed to run industrial and retail facilities where plants and products are produced and sold.

In Downtown Los Angeles, the Green Street Building, a seven-story office, will have several tenants devoted to all things cannabis, from a restaurant to a law firm.

Though a complicated sector to get deals done, there is reportedly evidence that it pays off. A CREW Network report from last year made said that the marijuana industry is bringing new life to blighted shopping centers and outdated warehouse districts. It also cited a CBRE study that said cannabis-related warehouses in Denver between 2014 and 2017 commanded rents two-to-three times the market rate.

This growth is happening without federal legalization taking place, which is the biggest hurdle that operators face to due lending restrictions upon national banks. With many observers calling that level of legalization inevitable, it might be good for interested real estate companies to get involved now, before over expansion becomes a potential issue.